Rush Morgan is an Upstate-based singer-songwriter and road warrior. He’s a kaleidoscope of folk rock and Americana spirit, held together by strands of old soul and timeless rock inspirations. Over the past 10 years, Rush has made name for himself in the Southeast and abroad as one of the region’s premiere touring songwriters, opening for Peter Bradley Adams, Taylor John Williams, and more. After spending a year in Nashville attending the respected Dark Horse Institute, Rush cut his teeth and cut his debut record, River Stone — an album that was highly acclaimed, being described as the workings of a “true musical omnivore” in the Greenville Journal. The album was recorded with renowned producer & multi-instrumentalist Jon Estes (Langhorne Slim, Dolly Parton, Kesha). On stage, Rush Morgan’s skills have been honed to a sharp point of passion and consistency. He’s a natural-born entertainer, and with sounds reminiscent of legendary acts such as Jackson Browne, Rayland Baxter, and Gillian Welch, he shines a light in every room. 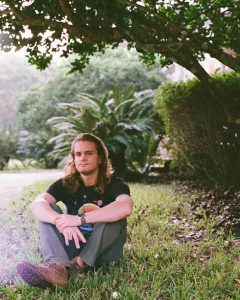