Jeff Edwards Band: Beyond the Sunset

Since 2016, Jeff has been writing, performing, and touring the Upstate as a solo artist and frontman for his band. Originally a guitar player in a now-defunct Spartanburg group, he was inspired to take up frontman duties by the thriving acoustic music scene.

Inspired by classic artists like the Doors, Radiohead, and the Cure, Jeff began writing and performing his own original music as well as cover songs. Not long after picking up lead vocals, he started receiving favorable comparisons to Neil Young's style and voice. With amazing flexibility and range, Jeff plays both intimate unplugged solo acoustic shows and loud and proud full band shows. "Have guitar, will travel" is the band's motto, performing anywhere from Anderson, Easley, Greenville, Spartanburg, and beyond.

Edwards released his latest EP, Beyond the Sunset, in March of 2020. Never one to slow down, Jeff plans to release a full length album in 2021. 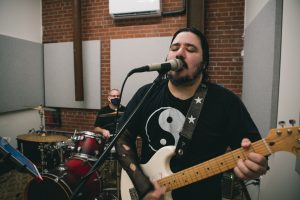