Eric Weiler: Just Come on Over

Eric Weiler is a blues influenced guitarist and singer /songwriter who was born and raised in Huntington, West Virginia. While growing up in Huntington, Eric began playing guitar professionally at the age of 12 and performed with the Oakwood Beer Band, The One Eyed Cats, Overflow, and The Remedy. Within a few years Eric’s talents became well known to those in the North Eastern Region of the U.S. which gave him the opportunity to share the stage with established blues musicians as well as opening for many national acts.

Now an adopted son of Greenville, Eric has enjoyed a tenure playing with The Dirty Audibles, The Big Jar of Jamm, Sweet Mojo Rising and now with the Eric Weiler Group. Eric has been caught jamming with the likes of Tomo Fujita (Berkley School of Music Guitar Instructor), Ike Stubblefield (Hammond B3 legend), Jeff Sipe (Aquarium Rescue Unit) and many other great players. In one minute Eric can conjure up the vibe of B.B. King, then morph his sound into a Clapton-esque vibe and then eerily summon the soul of Jimi Hendrix lighting up the stage every time. 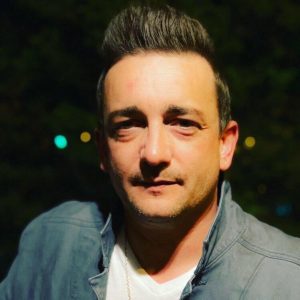